Well Top O’ the Mornin’ to ye…or evenin’ to ye, depending on when you’ve decided to join me here in the blogosphere! And thank ye I do, for joining me. It means a lot. Truly.

Since you’ve made your way here, please pour yourself a spot of tea or a wee pint of the black stuff and let me tell ye what I’m up to!

This past January, on the eve of my 35th birthday, after much soul searching and even more heart ache and break, I decided that I needed to muster the courage to end my 6 year relationship with my fiancé, return the engagement ring and thank him for having asked me to build a life together in the first place. I packed up my hatchback with all my worldly belongings and for the umpteenth time in my life I found myself moving back into my parent’s home. The home I grew up in. The home that had been a safe haven for my sisters and I for the past two and a half decades. Once again, back to the support and succour of my family. Except for one disconcerting fact; both of my folks were dead. 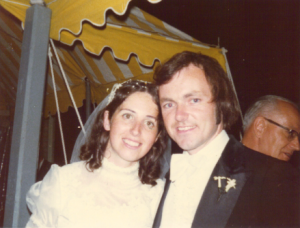 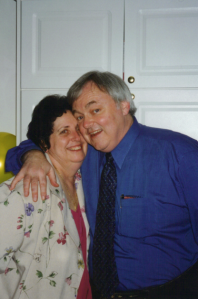 Ma and Pa on their 25th Wedding Anniversary

At 35, I didn’t blow out any birthday candles on a cake. But the light that used to live inside of me, that little pilot light, that little spark, was perilously close to being extinguished. I felt lost, broken and ready to surrender. Until….

My dad passed away 10 years ago, when he was only a month into his 57th year. He was a good man. The best actually. I was lucky. I knew it then and I know it now. He was a criminal lawyer, full of Irish blarney and wit, a dreamer, a fighter for the underdog, and a champion for the whimsy in life. He fought cancer for 3 long years before he died on July 2, 2004. He was noble and yet refreshingly human in his battle. He didn’t surrender to the beast, but he never thought himself above the war. He had a dark and healing sense of humour about his illness, his life and his death. I remember after he’d had a tumour removed from his brain and we were leaving the hospital in Toronto, on our walk to the van, with 28 fresh staples in his noggin’, he said “Meg, I think I’ll have you swing by the office on the way home so I can grab a couple of files.” “Um, no Dad! That’s insane! You’ve literally just had brain surgery”! “Meg, it’s just brain surgery, it’s not rocket science”. How do you argue with that!?! I learned a lot from him during those dark days, about character, humility, vulnerability and love. My gratitude for the mere fact that he existed, outweighs my longing to have him back.

Fast forward 8 years and my spunky, feisty, giant hearted firecracker of a mother was diagnosed with lymphoma, just 2 days after returning from a trip of a lifetime to South America to see the penguins on the Falkland Islands. 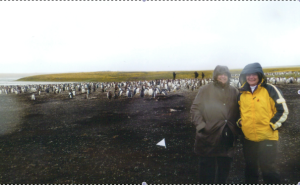 Mom and her friend with the penguins in the Falkland Islands, March 2012. One week before her diagnosis.

She had some pain in her back, we assumed from hauling around her luggage, but it turned out to be a fast growing cancer, the kind that required immediate treatment before biopsies had time to be analyzed. And on the topic of biopsies, we had the unfortunate experience of being one of those medical statistics where, despite our best efforts at advocacy, things went wrong. Somewhere, somehow, by someone, my Mom’s biopsy was lost. And so her treatment was not being tailored to her particularly rare variety of lymphoma. Mom had been a nurse for over 40 years, in hospitals, in the community, she even taught nursing, and now the same system she had served so well, had failed her. The irony was palpable. Mom’s battle was painful, unrelenting, frantic, and devastatingly short. Four months after she saw her penguins, she was dead. And my grief was overwhelming. I had basically moved in with Mom for the months leading up to her death. I vowed that she would not have to be alone with her fear. I would bear witness to her struggles, her panic, her life and her death. I tried desperately to save her. And I blamed myself in some way for her passing. If I’d just gone to medical school instead of theatre school, if I’d prayed harder, if I’d made her eat more kale, if I’d meditated longer, if I’d…if I’d….if I’d….she’d still be here. I’ve forgiven myself….I think. I think….

And on top of all that, I was in a relationship with a great man, who turned out to not be a great man for me. I was becoming a shadow of my former self. A diminished version of the me I used to know. I was shaving down the edges of my square peg to fit into that round hole life. We were opposites, which I’m told, attract! This was our second time around in love. We’d dated when I was 19 for a year, took a 10 year break, reconnected and found ourselves, 6 years later, in a house, in the suburbs, with a ring, and a plan to live the life he envisioned for us. There wasn’t much room for the actual me in that scenario. The same things that drew him to me 6 years earlier, like my spontaneity, zest, and whimsy, were the same things that he grew to resent about me, and were therefore the same things that were being destroyed.

7 months ago, as I lay for the 7th hour in a row, in the same position on the floor, the salty taste of tears drying on my lips, I knew I had to do something to save myself. My soul was in misery and it had to be resuscitated before it was no longer an option.

So yada yada yada, I returned the ring, moved into my folks house, and in the process of clearing out some of their old stuff, I found the thing! I found my dad’s voice.

I found his journal. A journal he had written in 1973 when he was 26 years old. It was a time in his life where he had been quite lost, adrift, and he’d decided to take his bike, travel to Ireland on his own, and cycle until he found out who he was and what he wanted. I remember him regaling us with tales of his adventures! Even as a young girl I knew this trip had helped shape him into the man he had become. He even named my younger sister Kerry after the county on the west coast! A bloody poet I tell ya! He had long thought the journals were gone, lost in a fire he and my mom had had in 1977. But there they were, his own handwriting, hard to decipher and soulfully etched. He wrote of the beauty of the country that was his ancestral home, the sacredness of solitude, the sting of loneliness, the joy of laughter and the value of his fellow man. He took a moment to stand on the precipice and to just breathe. And in the end he learned some truths about love, life and himself. And he wrote it all down. He was telling me exactly what I had to do. “Go! Flame your pilot light little one! Listen to your Da!! It’s just bike riding, it’s not rocket science”!

Da on his bike in County Kerry, Ireland 1973

The trip couldn’t be done on any old bicycle, no! It had to be done on his – a 1973 rusted out Peugeot, covered in cobwebs and hanging from the rafters of the garage. I took it down, had it refurbished and I’m taking her back to the roads she traveled some 40 years ago in the south of Ireland, where she’ll steer another lost Murphy back to themselves.

And so I’m going. I’m taking his bike and his journal and I’m setting off on a quest of sorts. Perhaps if I go backwards and recreate his journey, I’ll actually be able to find my own path forward. And because I did go to theatre school, (and not med school!), I decided that I need to create something out of all of this. So I’m making a documentary film. Because, although my story is personal, I know its heartbeat is universal. I’m hopeful that you might see some of yourself, dear friend, mirrored in this film and maybe it will help you heal a little bit too.

So thank you for joining me on my journey. For someone who felt so alone months ago, I feel mighty buoyed now! Thank you for that. Please follow my ‘blawg’ as I journey, for as the Irish are wont to say, “some roads aren’t meant to be traveled alone”.

And so… Ireland. . Kick off, use your legs, lean into the turn, look down the winding road. Take the hill. Breathe through it. Just breathe. There’s a new journey in front of you. And maybe a coming home. Because, sometimes, when life knocks you on your ass, you just have get back up, brush yourself off….and get back on the bike!