And then there was 1.

I am now on my own in this green country, and I’m both excited and a little nervous. More logistically nervous, than I am intimidated by the prospect of spending time in my own company. My cinematographer, Robin, has hopped a flight back to Canada, Sue my sound gal has gone off to record some ‘Big Fat Gypsy Weddings’ for a TV show, and my Aunt and Uncle have headed north in search of ancestral graves. If something were to go wrong with the Red Divil, there’s no convoy to help me. It’s just me….and well, me kid!

I’m an extrovert. Sometimes exhaustingly so. It’s rare that I’m ever alone, truly alone, in my own company for any significant length of time. I do get time by myself, but it’s usually tightly sandwiched between other activities where I’m surrounded by people. And I like people. A lot. But I really wanted a portion of this voyage to be completely on my own. To force myself to be quiet and fly solo. My cell phone isn’t roaming, no one I know can reach me, I am momentarily cut off from my familiar rolodex and I’m feeling oddly lonely and remarkably unencumbered. Just me, my thoughts and I on this long Irish road.

Dad wrote, “Cities have a way of making one lonely, despite their reputation for gaiety. Perhaps it’s the noise, the confusion, the pace. I think I’ll get back on the road, it’s easier to see the horizon from there”. For the first time in my life, the bustle of the city has tired me. I’m heading west again, back toward the coast, where I can hear myself think.

About 13 years ago I was working in Toronto for the Multiple Sclerosis Society, in the Ontario division of their fundraising department. One lunch hour I decided to make good use of my time and run some errands. It’s been a long standing joke among friends and family that I operate on “Murphy time” because I always think I can accomplish more than humanly possible in any given time frame. “Yeah I can meet you at 1, just let me finish writing my novel, baking this cake, painting this wall and waxing my car. I’ll be right on time”!

On this particular day I was feeling great about checking things off my to-do list. Bank, check. Gift for Julie’s birthday, check. Return way too expensive shirt to The Bay, check. I was running back to the office at Church and Bloor Street, working up a sweat, distracted by my own thoughts when I saw someone I knew. The office building where I worked was constructed of reflective glass and as I reached for the door handle to let myself in, I noticed a girl I worked with coming toward me. It was a split second recognition of someone I liked, so I smiled and reached to hold the door for her. Much to my own embarrassment, the girl I had recognized, was myself. Yep, I was so distracted by my own busyness, that I waved to my own reflection and held the door for myself!

As I waited for the elevator I laughed at my stupidity. But then I had another thought. How cool was that?! When I wasn’t paying attention, I just recognized myself as my own friend.

I am blessed to have incredible friends in my life. And I believe myself to be a worthy friend in return. But I haven’t kept up my end of the bargain in my friendship with myself for the past few years. I haven’t been kind enough, supportive enough or forgiving enough to myself. And that needs to change.

Why is it so much easier to be nicer to other people than we are to ourselves? Perhaps some of it is a learned behaviour as we are told that humility is an admirable quality, which indeed it is. But humility does not require us to be truly self-deprecating. Perhaps it’s because we spend so much time with ourselves, that we’re bound to get on our own nerves. But in reality, if we’re going to spend an entire lifetime married to ourselves, shouldn’t we learn to get along with our one true love? Shouldn’t we dress ourselves up and take ourselves out on the town from time to time? Shouldn’t we put as much effort into loving ourselves as we do into loving others?

When my mom was sick, she was brave but scared. Everything was happening so quickly and being alone was sometimes frightening for her. Her thoughts were becoming her own worst enemy. When she was admitted to Kingston General Hospital for some intense treatment, she asked, that whenever possible, I stay in the room with her. And I did. My family and I had a rotating 24 hour clock of care giving. I found it very difficult to relinquish control and leave the room, and so I rarely did. I became a fixture on her right hand side. I vowed to myself that I would stay near her so that she never had to feel afraid, alone. I may have been overpowering and I may have stepped on some toes along the way, for which I am truly sorry, but during that time I regrew a soulful umbilical cord and I couldn’t have severed it if I’d tried. 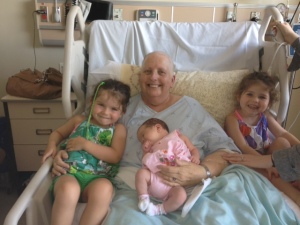 Sunday September 16, my sisters and I were forced to take my mom to emerge. Her blood pressure was dropping and she was dehydrated. We needed to get some fluids into her and restore some semblance of physical balance. We were seasoned pros by this point, one of us called the ambulance, the other readied mom, the third collected all of the pertinent information that they would require upon our arrival. We were a good team. Mom was lucid, but in a great deal of pain. She had a PICC line in her arm, which is basically a semi-permanent intravenous line, so that when you need any form of IV, you have an access port ready to go. However, Mom’s PICC line turned out to be blocked. So we resorted to the age old method of trial and error with a needle and a vein. It was proving impossible. They were completely unable to access a vein, so they had to opt for a more serious procedure; accessing a larger vein in her neck. It was at this point that the three of us were asked to step to the other side of the flimsy curtains. My mom said “no, please let them stay, I’m scared”. It was heartbreaking. For many reasons, they had to insist that we remove ourselves from the space. We obliged, but we refused to go far. There was a crack left in the curtains, through which I watched them try and work on my mom. It was the most horrific, traumatic and helpless moment of my entire life. They had to hold her down, she was crying and literally begging them to stop. I stared at her and willed her every ounce of strength I had in me. I willed them to hurry and I willed myself not to throw up from fear and pain. It was then that she crashed and was rushed to the ICU. She was put on a ventilator and I never heard her voice again.

I realized, standing there, staring through the split curtain, that regardless of the connection you share with someone, we are actually, all alone. We enter the world alone and we exit the world alone. And there was no vow I could make that could change that reality for my mom. She had to finish this journey on her own. And since that’s the case for all of us, then we’d better stop wasting time being unkind to the only person who is always with us; ourselves.

So here I am cycling the Irish Midlands, and there’s not much going on but pedalling, breathing, and some thinking, (with a wee dab of swearing sprinkled on top, just to add some colour). I’ve decided to make up with myself. Give myself another chance. It’s not too late for this relationship with myself to work. So, I made a vow. That for richer and poorer, in good times and bad, in sickness and in health, I vow to be my best friend, until death do me part. Mazel Tov to me!

In one of my favourite spiritual books, “Anam Cara – a Book of Celtic Wisdom” by John O’Donoghue, he writes “Real friendship or love is not manufactured or achieved by an act of will or intention. Friendship is always an act of recognition”. I recognized myself that day in the mirrored glass of a high rise in Toronto, and I recognize myself today on this long stretch of road in Ireland. May you take the time to recognize yourself. May you be your Anam Cara. Your soul’s own best friend.

9 thoughts on “My Anam Cara”