“Back to Ones” – a film term used after a scene has been shot and “cut” has been called. Then the Director or Assistant Director will yell “back to ones”, meaning go back to your starting places….we’re doing that scene again.

Just outside of Listowel, up in the hills, lies the tiny village of Rathea, (pronounced Ra-hee….oh you sneaky Irish and your made up pronunciations). It’s a beautiful pastoral farm area and is the traditional home of the Galvin clan, which is my dad’s mom’s side of the family. My great uncle, Clare was an exceptional historian. In the land before time, when things like google and ancestry.ca were figments of I.T. imaginations, he was keeping it old school. Armed with a pen and paper and his gift of the gab, he would go back and visit Listowel regularly and gather notes and facts by talking to any and everyone, and gradually he pieced the ‘where did I come from’ puzzle together. After his death, my Aunt Anne has taken on the burden of family archivist and has been sifting through his files looking for herself in our common past. In one set of Clare’s notes, he talks about the Galvin homestead, a lovely yellow farmhouse situated directly across from the small church at the top of the hill in Rathea. So, on this fine summer day in 2014, with the sun just poking its head out from behind angry clouds, as we crested the hill that marks the centre of the village, there sat the yellow farmhouse. And it seemed perfectly logical to stop. Well, we’re family after all….right!?

My Aunt and I made our way to the front door of the house, not having a clue what we were going to say. Anne suggested something innocuous like “Hi, we’re from Canada and we believe we’re related to the Galvin’s that once hailed from this farm. Are you kin of those particular Galvin’s?” I suggested something like “Hi, we’re the Canadian Galvin’s and we’ve come to reclaim our land.” I was informed that she’d be doing the talking.

We met Gearoid, a handsome 17 year old boy, in the driveway. The anglicized version of Gearoid is Garrett; a name that has shown up in our family history time and time again. We have our very own Garrett Galvin back in Peterborough; oddly enough, Gearoid and Garrett look like they could be related. We’re on the right track! He takes us to the dairy barn to meet his father, Tom. Well knock my socks off, if he also doesn’t look like he belongs to our clan. From the blue eyes to the Galvin shaped head, (I know that sounds weird, but it’s true!), not to mention his pleasant personality, he must be one of us! He invites us inside for scones and tea, pulls out a rolled and crackling sheet of paper that has survived many many decades and says “yep, I’m your cousin. After 200 years, it gives me great pleasure to say, welcome home”.

I won’t get into the nitty gritty of how our old fella left for Canada in the 1800’s and how they’re old fella stayed, but I will say that it was hard to take it all in, but in a good way. I’ve always been a history buff, but not in a traditional sense. I am actually terrible at remembering historical dates and facts and can’t remember the details of who started which war and why. But I do love the heart of history. I like to run my hand over a stone wall that has existed for centuries and imagine the hands of the past that created it. I like to wander through old cemeteries and read the names of those long deceased out loud and imagine what they were like. I feel as though, for a moment, it gives them breath again. I like to put my finger in the bullet holes left in the sides of an old stone church and not think about the political details of the once raging war that created them, but of the individual lives that were affected by those single bullets. I don’t think it’ll get me hired on at the Smithsonian, but perhaps there’s a place for “heart history” somewhere!

After my folks died, I had this terrible feeling of being anchorless. Like suddenly your history has been taken away. It’s hard to describe. In some ways I felt like perhaps I’d made my parents up, and subsequently my history was nothing more than a story. Your identity shifts instantly. You are no longer someone’s child. You are thrust into a process of redefinition. Who will be the new matriarch or patriarch? You feel lonely in a way that shakes your bones. I felt like I had been dropped off on this planet with no idea how I got here or what I was supposed to do next. And that feeling hasn’t really gone away in the past few years. It’s changed, but it’s still omnipresent.

I felt that coming to Ireland might help me deal with some of that sense of “who am I, how did I get here and why are all these people looking at me” feeling! I have felt a great deal of responsibility to my ancestors of late. I know that sounds strange, let me try and explain. Here I am standing on this planet, the result of a thousand decisions made by a thousand different people, who had no idea that one day I would be the manifestation of their choices. There were difficult choices, and mistake choices and choices I bet some of them wish they could take back. But nonetheless, I am standing here, the last in line so far, taking up my tiny space in history, and what am I supposed to do with it? How do I honour all of those people and the choices they made when it had been their turn to take up their tiny space in history? I feel them all running through my veins and I want to do right by them and make them proud.

And now here I am, sitting in a kitchen in Rathea with distant relations sharing a scone, some stories, some banjo playing and some laughs, and I can’t help but think….back to ones.

Dad wrote, as he wandered through an old ruined church and cemetery, “…the taste of the past is here in full measure. I was alone for about 15 minutes in the structure and the feeling was strong. I could almost hear the chants of the Friars in the wind, whistling through the crumbling stone. The graves of many latter day deceased are scattered throughout the interior and without. There is a sense of gloom here as well as history and it makes me feel, for a moment, very far from home. I do not believe, however, that the voices of this place would speak as loudly if one were not alone among them.”

Perhaps I come by my vocation as a ‘heart historian’ honestly! 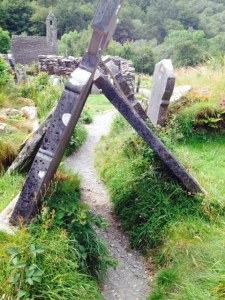 After bidding adieu to our fine family, and making plans to meet up again, it was time to resume the cycle and the filming.

Now the thing about making a film about cycling is you don’t end up doing much cycling! Well, not continuously anyway. It involves a lot of stopping and starting and ‘wait, hold it, ok….go”! It involves people shooting from the back of cars, the front of cars, the side of cars, the side of the road, on top of cliffs, wiring for sound, sweating through sound equipment, and my favourite of all, “can you do that hill one more time, we’re gonna get it from a different angle”!! Sure, no problem, back to ones. 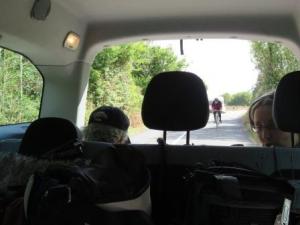 I swear at this rate I’ll be the only person who cycles around Ireland for a month and gains weight! Oh the delicious Guinness and potatoes!

The mountains of County Kerry are breathtaking, but as a cyclist, frightening. The roads twist and turn on themselves and seem to be in a continuous upward swing. Whoever wrote the proverb “May the road rise up to meet you” sure as hell had never been on a bike!

Dad wrote of this particular climb that I was now making toward Turners Rock Tunnel, “the overcast sits like a lid on the mountain edges of this huge bowl and despite the expanse, I feel almost enclosed. It’s raining very lightly and the wind is quite blustery which creates a strange effect as it sweeps over the rocky hilltops and the stiff grass – a whistle like sound, like the squeal of a thousand mice scurrying about. I stopped for a moment so that even the sound of my wheels would not disturb – it is eerie indeed. The tunnel at the top is perhaps 200 yards long and about ¼ of the way through is a great hole in its roof looking up to the sky and dripping water. The ride down the other side was exhilarating and I could shift into high gear and really fly under power, banking into curves, leaning way over…perhaps reckless abandon if you will, but grand in any event!”

It was grand indeed! I rode through that very same tunnel and felt the water drip onto my head from that very same hole in the rock. I flew down the other side with reckless and fear filled abandon and screamed WAHOOOOOO the entire way down!

My cinematographer said “great….can we do it again because a huge lorry got in the way of the shot”. 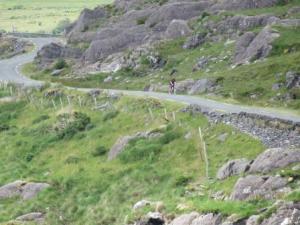 This whole odyssey has been about ‘back to ones’. Whether it’s meeting old relations or starting from the bottom of that hill again. When my dad did this journey he didn’t even know that one day, I would exist. He didn’t know what his life had in store for him. He didn’t know the joys, the struggles, the inclines and the reckless downhills. He didn’t know that someday I’d be taking his words, his bike, his spirit and that I’d be heading back here. Back to ones.

But here I am. Ready to honour the thousands before me. Ready to take up my tiny space in history. So roll camera, roll sound. Annnddd…Action.