Fair Play To Ya

“Fair Play to Ya” – an Irish idiom used to show respect. It could also be translated as “good on ya” or “well done” or “you’re crazy for trying that, but I nod my cap to you nonetheless”.

As I head further south on this giant rock called Ireland, the terrain and my thoughts begin to change. For such a small island, it is remarkable how much the geography and the people vary. In this southwest corner of County Kerry and County Cork, the hills are steep, craggy and intoxicating. So too are the people.

From these hills of Kerry, dad wrote, “The vantage is incredibly restful. About a mile of sloping fields below me, each walled to itself, some buildings as well and grazing animals. Beyond that, the sea cradled in the mountainous arms of the ring of Kerry. The water sparkles with the sun even to the horizon and there – a vast expanse of snowy clouds rises like some great arctic mountain range. The sun plays with these green hills like some dappled dalliance, softly running from shadow to light across their uneven sides.”

I’ve decided to tackle these mountains fueled on thoughts of my folks and their own dappled dalliance.

My mom and dad were in love. Not all the time. But they were in 2004 when my dad died and they most certainly were in 1973 when my dad wrote this journal I’m carrying around. And I know there were periods of great love and great strife in the 31 years between. Knowing that fact makes me respect them more. I have always been more fascinated by how couples manage their times of difficulty than their times of bliss. Falling in love is the easy part, it’s the staying there that’s hard. And on this particular mountainous cycle, I found myself asking the question; how do you fall in love forever? 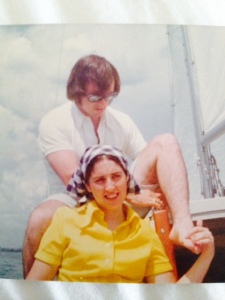 My dad was a private man. He was conservative with a poetic heart. He wasn’t a romantic in the traditional sense, and I’m sure my mother wished he’d been more so. (Who knew that a fax machine for a Christmas present wasn’t the gesture of a true Romeo)?! He’d be thrilled that I am recreating the essence of his journey, but he’d be scarlet from head to toe if he knew I was reading all of his words…and then sharing them with the world! Well, that’s what you get for up and dying on me Da! Payback from another realm!

My mom and dad weren’t yet engaged when dad set off on this adventure. They had dated for years, but had spent some time apart after my mom decided to turn down my father’s first proposal – a little known fact that I didn’t find out until I was about 30. She felt he had been floundering, and that he didn’t know what he wanted out of life whereas she had people to see and things to accomplish and she didn’t need him cramping her style. In fact, when my mom finally did accept a proposal from my dad, she actually had a date with another chap that same night. And yes, she still went. Well, it would have been rude not to, right?!

In the summer of 1973, while dad was looking for himself in Ireland, he somehow found his way forward with my mom. From the end of the Dingle Peninsula, where his chair now sits, he wrote this note to her; “I knew how deeply this spectacle would affect me and I wanted you to be a part of it Mary Anne so I took your beads along with me in my pocket. I stood apart for a moment and looked out over the cliffs to the sea and to the western sky with the dying sun. The story has it that the Blasket Islands are the last parish to the new world so I’ll not be closer to you for a while. I put my hand in my pocket and held the beads; I felt the sea wind in my face and I felt you with me for a moment. I said I love you, did you feel it?”

Well obviously she said yes after that!

Growing up, your parents are just ‘your parents’. They’re not real people with real lives and real feelings. Don’t be ridiculous! Since your own world exists only as far as the end of your nose, it doesn’t even occur to you that they did anything at all before you existed. And if they did have a life, it certainly wasn’t one that involved romance of any kind! Ewww! But now that I’m a real life, actual grown up myself, I like knowing that my parents were real life, actual people too who had a life before I existed and that in many ways, it was probably a lot more fun than after I came to be! 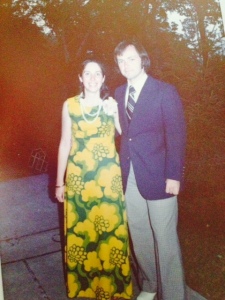 Tucked inside my dad’s journal are two telegrams that he picked up at the post office on Grafton Street in Dublin. They were from his girlfriend…my mom. Her handwriting was the same when she was 26 as the day she died. I love seeing her perfect cursive, knowing that her hand had formed each word. She wrote about having just acquired a new job that would take her to Hamilton, further from where my dad had been living. In turn, he wrote in his journal about being happy for her for this opportunity and yet he was quite nervous that it meant their future was more questionable. It’s interesting to read about the life versus relationship choices they were faced with from a position of knowing how it all turned out. The things we worry about at the time that sort themselves out in the end. Eventually. She writes of her sailing lessons with an uncoordinated lad named Irving Frisk, (no joke!), and about her new ‘service station glasses’ from which they’ll be able to enjoy a Tom Collins. She writes about a family graduation BBQ and she says she misses him. She writes “Please be careful Poo…I love you so much and I want you back in one piece”! Poo. I like that. She signs it “xoxoxoxo…and hurry home for more”. I like that too. 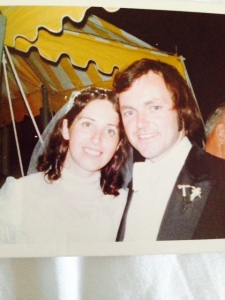 I hope someday I’ll be ready to be someone’s Poo again.

It’s amazing how lost love can be as devastating as death. Sometimes we make the choice to stay in a relationship that has died because we can’t face burying it. So we bury parts of ourselves instead. I am on a mission to exhume myself.

As I rode this particular stretch of bumpy, vertical road, I invited my ex-fiance into my heart and along for the ride. I talked to him about our happiest of times; when everything was possible and we felt like we could fly as long as we were together. I thanked him for those days and for stretching my heart that wide. I talked to him about how we grew apart, how we hurt each other, and I revisited our times of trial. Those periods when the climbs were too high and the view from the top of the mountain only seemed to bring more uphills with nothing left in the tank to conquer them. I thanked him for those days too as they also stretched me wide open.

In a way, I believe our souls all have contracts with each other. That sometimes our souls encounter each other so that we might learn something, and when that lesson has been taught, our contract is through, we shake hands and we move on, better for having crossed paths in the first place. I thought about my last relationship and what the purpose of that soul contract might have been. From the top of this rocky promontory, looking outward to the open seas and inland to a windswept shore, I think my lesson was to learn to trust myself, to listen to my own voice. And now, the irony is, I’m all alone on this bike, and my own voice is all I can hear. I have my theories about what our contract might have meant to his soul, but this is not the place nor is it my right to say. What I can say is that from where I sit, I’m grateful. And I hope he is too.

Dad wrote, “The scene is full here; of sights, of colours, of sounds and smells; of feelings. To lay on the grass and feel the sun is truly a wondrous moment. I should like the two of us to sit in this spot; her before me, her back against my chest, her hair against my face, with no sounds, not even that of breathing. Just touch. The feeling of together, warm in the sunshine, warm in the heart and look at the sea. I miss her kind of sorely tonight, so I shall salve the pain with a cheeseburger, chips and a shake at Whimpy’s”.

I hope in death, that is the scene their souls are playing out.

8 thoughts on “Fair Play To Ya”